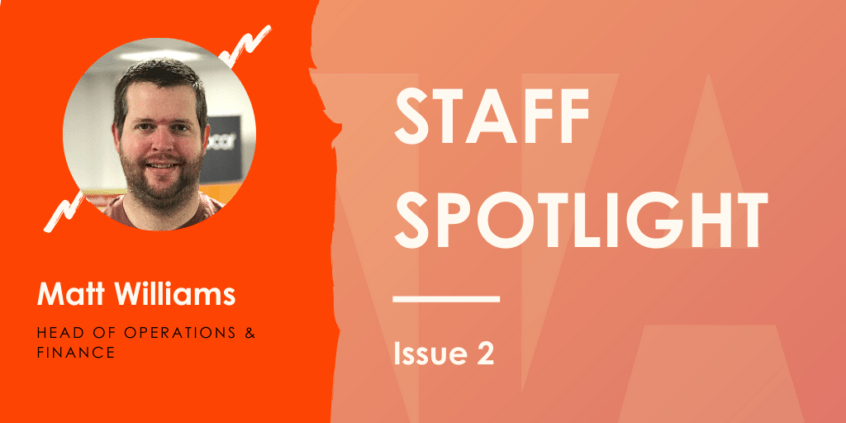 Get to know the finance guy!

Matt Williams is Head of Finance & Operations for both TA (UK) and our head office on the Canary Islands, TA (International).

With a background in 3D design, Matt decided to make a significant change in his career path to work at Tablet Academy. Starting as a freelancer in 2014, Matt was offered the opportunity by our then MD, Mark Yorke, and CEO Steve Molyneux to build and manage an eCommerce shop for the company.

Over the years,Matt has, at one time or another, managed most administrative support roles, including events manager, IT manager ,HR manager, and shop manager.

With the departure of our former operations and finance manager, Matt was offered the opportunity to take over the role and grasped this opportunity with both hands. His role soon developed into Head of Operations and has never looked back.

Matt always refers to Tablet Academy as the ‘Tablet Academy family’ due to the feeling he gets from working here and the people he works with. In his words “it is the most enjoyable part of the job for me as everyone is so helpful and supportive of each other”.

What did you want to want to be when you were younger?

Product designed/inventor or a Cowboy.

What do you like to do in your spare time?

What is your most used emoji?

Either the thumbs up emoji or the crying with laughter emoji.

What’s your favourite sport to watch and which team?

I don’t have a favourite sport, with the exception of supporting England in general.

Do you have any hidden talents, and if so what is it?

Not that I can think of. Nothing that I would class as a talent anyway!

What is your guilty pleasure?

Who is your favourite comedian?

What country haven’t you visited that you’d like to go and visit?

If you could have dinner with someone famous dead or alive, who would it be?

Albert Einstein or Isaac Newton, but also Norman Wisdom for some comic relief!

Stuck on a desert island, what one item do you choose to take with you?